I’m still churning away at these rings. But I’m seeing great progress. I plan to finish up on them tomorrow.  In the meantime, I figure i would show a little technique i’m using on them to add some interesting detail. 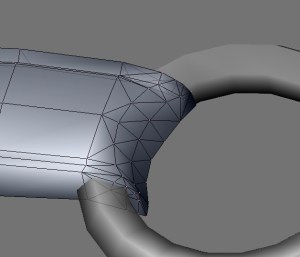 A Ring after wrapping

After wrapping, the ring looks pretty darn good as it is. But, I’m not content with good. Realistically, after wrapping the strap around and riveting it, there would be a tail piece visible. I could explain it away and say it’s underneath. But I think it would be nice to have something to represent it anyway. and I know of a way to add it, without adding too many polygons, so why not?

The first step is to select the faces where this ‘Tail’ would be located. Luckily my faces are already divided in such a way i don’t have to do any cutting to get a nice squarish piece. All you have to do then is Extrude the piece up, by pressing E, choosing Region, and dragging the mouse a little bit. 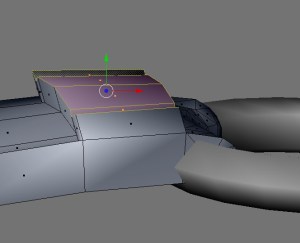 This basically raises the existing surface, and creates a new edge. Not a lot of new faces are added, only 14. But We can reduce this count even more, as what we have now is not exactly looking right yet. 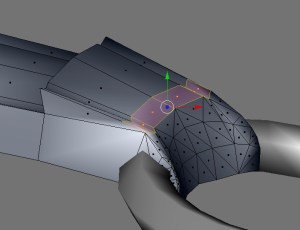 Angling the 'Tail' to flush with the top surface

What I do is rotate the surface so one side becomes flush with the top. Then these adjacent faces can be merged. The two edge pieces can be turned from quads into triangles. We just shaved off 6 faces and the ‘Tail’ is done. One more trick though… 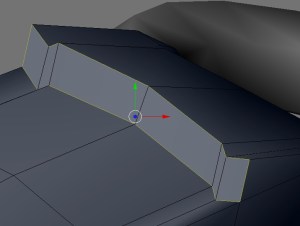 Splitting the end of the 'Tail'

It’s a really good idea to select the edges of the end and do an Edge Split. Otherwise the smooth setting on the other faces will make the end look bad with the viewer trying to smooth the end into the adjacent faces. It’s always a good idea on smooth surfaces to split off anything that is supposed to be sharp angled.

And the results are pleasing. With some additional texturing it will be pretty convincing. But we’ll save the texturing for later.  Something’s still not right though… 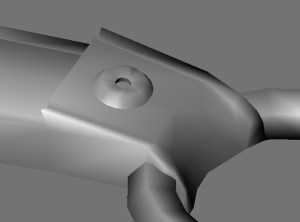 I have to add one of my trademark rivets. Now we’re talking! 🙂