And now Episode 7 of the gripping saga of how our intrepid hero, Darien Caldwell, relentlessly pursues all that is Meshy and Strappy, and Good. Prepare yourself for a gripping tale this week:

When we left off, I had been working on some textures. And work I did. So much so, that I actually finished! Huzzah! So what did I do then? Well, a lot of things actually.

I have been working on the animations, I have all the base animations done. I’ve shown a few trusted people and got some feedback, tweaking will ensue. I then decided before I go too far into the Animation, I should probably get the model rigged. A daunting task to be sure. But what must be done, must be done. So I began that task.

Right now the weighting is rough, very rough. But workable enough that I will show you some key shots selected to hide all the ugly ;p 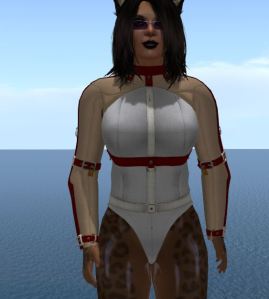 Pardon the funky colors, I was toying with the shading, and no alpha layers made yet, so a little poke through here and there.  Obviously that is the Canvas Texture and the Canvas Straps.  It’s interesting to note that in the VERY latest viewer 3.3.2 that LL released, they finally are allowing Bump to work on worn mesh. (see this JIRA: https://jira.secondlife.com/browse/SH-2961 ) I think this can play well with the canvas. I’ll have to see.

Now for the Drama:

You probably notice in that picture, no hands. Where are those mitts?  Well, I can’t show you because the results are so terrible, it’s embarrassing. And it all has it’s root in a software issue.

Up til now I’ve been using  Blender 2.49b with the SLAV plugin by Wiz Daxter to create SL body shapes and skeletons (which are also called Armatures).  This combination has served me well and what I see in Blender, is exactly what I see in Second Life after upload.

But, trying to stay with the times, for the straitjacket project, I ‘upgraded’ to Blender 2.62 and a package called Avastar which does a lot of what SLAV does, and more. All during production so far, it’s been great. Especially for the animation, it’s been a godsend.  But it was only after trying this rigged test upload I discovered it has a huge flaw.  When you customize a shape in Blender using Avastar, the resulting skeleton (Armature) is no longer a match to the default SL Armature.  This is quite different of course to how SL works.  So I can’t show you the hands because they are all FUBARed.  Actually everything is, but the error grows the farther from the Pelvis you go.  So the hands have the worst of it.  😛

The Creators of Avastar are aware of the issue it seems. And after some back and forth and a lot of experimentation, it seems an acceptable workaround is at hand. All of this had me sweating bullets because worst case scenario, I’d have to just about start over 😦   So I’m heaving a huge sign of relief and hoping their coming fix prevents this kind of chaos in the future.

But, back to happier thoughts, getting to the weighting is a huge step. There still a lot of weighting work to do.  Some parts are downright bad right now, and need a lot of TLC. But It’s getting there. 🙂