And now for what I will call, “The Shoelace Saga”! 😛

To avoid being long and boring, I’ll just say I spent pretty much all week on the laces for the boot. And I’m still not done with them yet. I feel like they are such an integral part of the item, it’s important to get them ‘just right’.

At first i had the idea to make one ‘X’ of the laces, then use the Array Modifier to copy them vertically, to get a column of ‘X’ going. But while this was ‘fast’, it look like ‘le crap’. 😛

Also being always mindful of poly counts, i wanted to try to keep it as efficient as possible. I finally ended up deciding the most nit-picky way was the best, and that was to create it as one whole long lace.

After creating some dummy pegs to use as guides, I created a bezier curve and threaded it around:

Much as I did with the Harness, I used another curve as the ‘cross section’ to give it shape. This time a simple triangle. It’s about the most efficient shape you can use and still seem ’roundish’. And for this it should be enough.

now the obvious choice for laces are eyelets. But Everyone knows good boots (especially long ones) use speed lacers instead. And for my purposes, they are actually more efficient to model than an eyelet. So that’s what I will be using. I am still working on the model a bit though, as I need to get it down to a more efficient design. There will be a number of these, so every vertice counts! 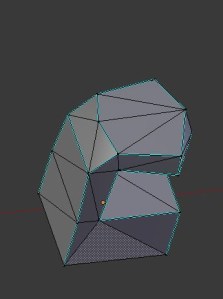 Lastly I wasn’t sure how to approach the area under the laces.  At first, I thought about really building it up in detail. But i now think that wouldn’t serve my purposes too well, so I’m going for something a bit simpler, but still versatile. I’m going to make it so you can have that area as either closed off (leather/latex) or open (skin/stockings).  Best of both worlds. 🙂

And I’ve spent so much time on this so far, I’ve still not got to changing that top of the boot yet. But I will! Not to mention all of these elements are very individual and haven’t really been brought together in a cohesive fashion yet. and all the detail tweaking to boot (no pun intended!)

Lace width is still up in the air.

I try to get everything to come together at once, save redoing over and over.  So a tweak here, a check there, until they are all just so and really to merge 🙂

But things are progressing, in a very Dari way. Until later…